“The old legend from Georgia says, that God gathered all the nations and announced the division of the Earth globe. Terrible rush started: every nation wanted to get the best place. Only Georgians, who didn't like big crowds, were sitting under the tree, sipping wine, singing songs and waiting for the decision. Suddenly God realised that all the territories have been divided already, and he forgot about singing Georgians. He felt pity about them. Worried, he said: «I have divided all the territories on Earth. The only place left, is very small however it is the most beautiful. There are vivid mountains full of crude ma­ter­ials, rich lowlands, breathtaking views and out of this world sea shore. I wanted to save that country for myself, but looks like I forgot about you, so that land is now yours…»”.

I knew nothing about him — beside the single poem published in “Kwadry­ga”. It was titled ZOO. I even can't say if I liked it. Anyway, that was a time for graduation from my secondary school, and the poem completely went out of my head. My family decided, that it was too early for the next stage of my learning. That year after my graduation I spent in my small town on reading poetry. Just for myself, I were discovering Yesienin, Rimbaud, Baudelaire; I didn't heard about Gał­czyń­ski at all. All those “Dragons”, “Red Lions” with his poems never came to my town.

My mother met the great Russian poet in Moscow, just on her trip back from Georgia, when the unknown past opened before her with the mystery revealed, with the re-born emotion. Here and there she slightly mentioned about what had happened to her in Georgia. And then someone that heard that story, came with a conclusion: “Anna Andreevna must listen to it!”. And introduced Natalia to Anna Akh­ma­to­va. First lady of the russian poetry was already able to move to Moscow, the ban of traveling and staying in Moscow for her was canceled just a few years earlier.

Countless crowd, head close to the head. Giant space decorated with flags. Flags were everywhere: on the cranes, on the water, on the ground. There was music coming from the giant speakers, along with some unrecognized words. On the dock there was a giant ship standing, secured by a line against going to the water. And the giant letters on the ship's side: M/s “K.I. Gałczyński”.

Art work and illustrations to selected works of Natalia Gałczyńska. 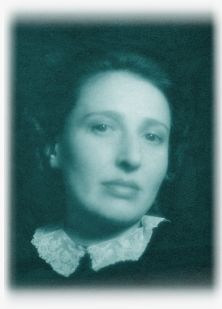 ‘Cause you are the ornament,
A moon in the manor of the night
You scatter lights through your hands
Like grains, with the solemn rite.

And a veil of the birds’ songs
On your shoulder, like a coat,
A rug on a hallway that overflows
The backyard, where Venus alone

Shines. You are a cloud and a flight high
Glare of water and a stone’s glint.
I wish I could save your cloudy eyes
From the oblivion’s sin.
(…)